Why do people complain?

Why is it so easy and feels so good coming out even though we all know it doesn’t feel good later? It’s like eating that great big greasy meal before going to bed only to wake up the next morning feeling like death.

So, why do people complain?

They believe life is not fair. They are genuinely unhappy. They are jealous. They lack empathy and think they could do a better job than others are doing.

So, why is complaining so dangerous? Some say complaining actually is a stress reliever and can be therapeutic in a sense (in some sick twisted way).

The research even says that when people are exposed to 30 minutes of complaining every day, it physically damages their brain. It damages the neurons in the part of the brain used for problem solving and cognitive functioning by peeling back the neurons in those areas. Sounds pretty intense and pretty detrimental doesn’t it!

Research also says the more you’re around a negative person, the more likely you are to mimic their behavior. Neuro-scientific data shows that the brain works more like a muscle than previously thought so the more you repeat a behavior the more you become that behavior. Complaining is like the beginning stages of a snowball rolling down the mountain… it can grow and pick up momentum quite quickly!

So, in closing, do I truly know my point with this blog post? No, not really, but I do know that complaining has both its pros and cons. Complaining serves a purpose but it also can be toxic and slowly erode the integrity of our teams and structures.

Perhaps we should start handing out pieces of paper with this image on them when complaining rears its ugly head… just a thought! 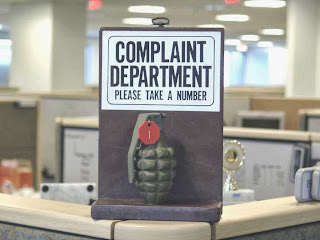 As educators in our respective districts, we must be strong and stay above this behavior. We must protect those who need protecting from those who purposefully or inadvertently spread their toxicity. We must always be the model of who we wish to see working with our kids.

We must leave no doubt in the minds of others that our integrity and fortitude will endure despite whatever happens. This is no easy challenge… but I think we can do it!