Using your #socialmedia presence for good...

Nobody cares what I have to say.

I don't have that many people following me, so what's the point?

My thoughts aren't unique... somebody has already said it.

I'm too late to the party. There's no point in starting now.

And my favorite... I don't have time to do that kind of stuff.

Far too often these above statements are still the norm rather than the exception. Most educators are actively involved in some form of social media, however, many aren't utilizing or harnessing the power of social media for 'good.' 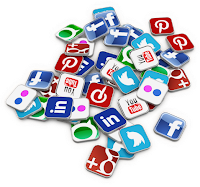 Now, before you get all defensive about your social media use, let me explain what I mean by 'good.'

By 'good' I mean using these tools to share and connect with other educators with the intent of enhancing one's craft in the educational setting with a focus on increasing student learning.

Hopefully this definition has calmed you a bit and you are nodding your head in agreement.

It doesn't matter if somebody has already said it or already done it... there are many others who haven't yet and they are just waiting for someone to repeat it so they can jump on the bandwagon.

In closing, embrace social media as the powerful tool that it is... and figure out ways to use this tool for good, because there's a whole lot of good out there and your voice will only strengthen and enrich what already exists.