Is it time to eliminate final exams?

There's also a growing list of reasons that finals really aren't the most effective at doing what they originally were intended to do.

But, let's ignore the trends being set by colleges and the realities of their ineffectiveness for just a moment.

Let's first look at the math and see if they are really fair: 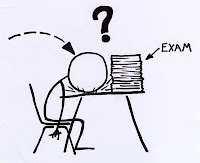 Let's assume a final is worth 20% of a student's semester grade. Then let's assume the student has an 85% in the class going into the final. That means that 80% of the student's grade is an 85%.

Scenario 1: The student receives a 100% on the final

Scenario 2: The student receives a 50% on the final

Even when the student did extremely well on the final the student wasn't able to move from the B to A range. And unfortunately, a poor performance has resulted in the student going down to a C.

Let's now consider the students who ultimately end up having to take finals:

It's no secret that many schools have exemption policies in place (many of which include factors that aren't related to academic performance or any demonstration of learning mastery); things like attendance, behavior, and arriving to class on time. Additionally, many schools require a student to have an A or B in the class to exempt the final.

So, which students end up actually taking finals...?

Sorry, but that just doesn't make sense unless we are trying to use the final as one last opportunity to 'teach' these kids a lesson.

Also, if finals are so important and are instrumental in preparing kids for a college that doesn't do finals anymore, or a career that doesn't really care about big summative multiple choice tests, then why would we allow some students to to be exempt?

If finals are so great, then we should be requiring all students to take them, right?

So, have finals run their course and is it time to eliminate them?

Or, are there better alternatives if we do in fact start eliminating traditional finals?

Have we outgrown finals and have they become an example of doing something in education without just cause and reasoning?

Is it time to eliminate final exams?


I'd like to thank @mathphanatic, @50wildcat & @jhalltech for pushing my thinking on this topic.