I was recently part of a discussion surrounding "professionalism" in a leadership capacity via Sam Fancera. In this particular situation, "professionalism" was defined as providing teachers with as much autonomy and freedom as possible while still following district policy, regulations and mandates. The question of professionalism came into play when Sam questioned if anyone had experience in a school where the staff yearned for a leader who is more directive and authoritative, rather than more hands off and supportive. 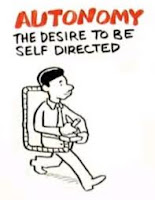 Scenario 1 - Staff members had experienced an environment where their opinions and feedback were not valued or appreciated, thus it was easier for them to simply say, "just tell me what to do and I will do the bare minimum to stay within compliance." In this scenario, ineffective leadership created an environment where autonomy and freedom were non-existent, thus directives and mandates became the norm.

Scenario 2 - Staff members were not interested in thinking for themselves or trying to solve their own problems. It was easier for them to simply ask for directives and mandates because it allowed them to exist while assuming no responsibility for their actions. This type of environment exists when staff members are penalized and reprimanded for taking risks and attempting to do anything more than the status quo. These staff members have been trained to fear autonomy, freedom and risk taking.

Scenario 3 - Staff members are not interested in freedom or autonomy and want directives and mandates for everything for no particular reason. They just want to be told what to do, how to do it, and when to do it. I have found this scenario to be the most uncommon scenario when dealing with educators.

In the first two scenarios I see an underlying cause that stems from ineffective leadership. When school and district leadership value the opinions and feedback of staff members while encouraging and rewarding those who take risks, you won't find many who are not in favor of more autonomy and freedom.

So, in response to Sam's question about "professionalism," I believe strong leadership is key in creating an environment where autonomy and freedom are not only the norm, but they are expected and demanded by all staff members. Just like we do with our students, we need to look for the underlying causes of why someone would act a certain way or think a certain way. As educators, we at least owe that to ourselves...