"Build an eight-foot-long wooden fence in the forest.

Lay out some bait and then go away for a week.

The fox is too crafty to be caught in a simple trap, and he will smell you and avoid the fence for days. But eventually, he'll come and eat the bait.

At the end of the week, build a second length of fence at a right angle to the first. Leave more bait.

The fox will avoid the fence again for a few days, then take the bait.

At the end of the second week, build a third wall and a gate. Leave more bait. 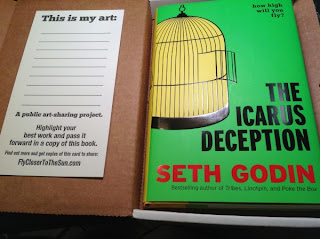 When you come back at the end of a month, the fox will be happily prancing in his safe enclosure, and all you will have to do is close the gate. The fox will be trapped.

This, of course, is what happened to us. The industrial age built the trap we're mired in, but it didn't build the trap all at once; it took centuries to perfect. And we were seduced. Seduced by the bait of decent pay and plenty of prizes. Seduced by the apparent security of the enclosure. And once the gate was shut, we were kept in by the threat of shame, the amplification of risk, and society's reliance on more and shinier prizes.

For us, though, the situation is even more poignant than it is for the fox. As the industrial age has faded away and been replaced by the connection economy--the whole-open reality of our new economic revolution--the fence has been dismantled. It's gone.

But most of us have no idea that we're no longer fenced in. We've been so thoroughly brainwashed and intimidated and socialized that we stay huddled together, waiting for instructions, when we have the first, best, and once-in-a-lifetime chance to do something extraordinary instead..."


**Excerpt from the introduction of "The Icarus Deception" by Seth Godin