The path to growth and development can be ugly at times. Educators are part of a world that is continually changing and evolving, and as such we are forced to take a leap, and at times take a leap when we are not ready. Going through all my education classes we were always told how rewarding and fantastic the field of education is, and from where I sit right now, I could not agree more.

So...the big question is...why are we afraid of standing out? Why are we afraid to speak up at meetings?  Why are we afraid to try something that has never been done before? If education is so rewarding and fantastic, why do we have so many educators afraid to act...? For all the great things we learned in college, they seem to have forgotten a big one...they never told us the amount of criticism and failure that go along with being an educator... 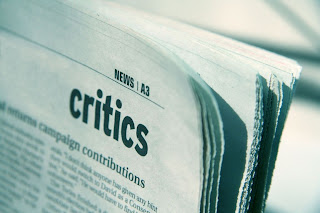 I would first really like to make a distinction between criticism and failure. Failure is something that happens; we learn from it and hopefully make the necessary changes so we can avoid making the same mistakes again. Failure is a valuable learning tool, and if used effectively, failure can be one of the most important things to ever happen to you. We ALL experience failure at one time or another.

Criticism, on the other hand, is something you get from somebody else. You have no control over what they say or how they say it, and most importantly criticism can hurt much more than failure. If you fail, that can be the end of it...you failed, next chapter or end of story.

Criticism is not so easily forgotten because the words can penetrate deep into one's mind and heart. When someone is criticized the words can permeate throughout an entire school...those simple words of criticism can stop an entire building from doing anything ever again that is remotely similar to what the criticized person did. Fear of criticism is almost always worst than failure.

How can we convince people it is worth it to take a chance and risk failure, or even more, risk being criticized? We have to create a culture and environment that encourages innovation, risk taking, and most importantly taking a leap even if we are not ready...support and reaffirm those risk takers!

At times, we need to address the elephant in the room. By recognizing something we are not doing as well as we should, we are able to take the first step in accepting open criticism.

We need to help educators to use criticism in a productive manner by providing helpful feedback. There is nothing worse than criticism without any helpful feedback. Additionally, be an example for others by not criticizing your colleagues, and if you feel the need to criticize something or someone, make sure you bring your book of solutions with you.

If you have time check out Seth Godin's view on criticism and failure in his book Tribes. One final thought...every time you get criticized means that somebody took notice of what you did or what you said, and more importantly it affected them enough to tell you how they felt. As much as it hurts, do not give them the power to bring you down...allow the criticism to fuel you toward growing and developing to do what is best for kids...